Brazilian jiu-jitsu, or “BJJ” for short, has a simple concept: you can overcome an opponent by using proper technique and leverage with takedowns and ground fighting. A strong and heavy opponent can be dominated by a smaller, weaker person that takes them to the ground and applies joint-locks and chokeholds. BJJ has evolved into a popular self-defense system. 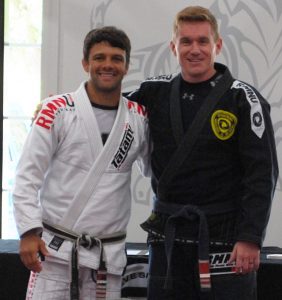 Joint locks and chokes are your two main categories of submissions. There are many submissions that are taught in jiu-jitsu. Submissions ultimately defeat your opponent.

Steve Snyder is a 2nd degree black belt, under legendary Robson Moura, in Brazilian Jiu-Jitsu.  Mr. Snyder, along with his team of BJJ black belts, are certified to give world-class Brazilian Jiu Jitsu instruction to students 12 years of age and older.